You are what you drink

I Loved how spot on this funny article is, particularly for the Light Lager, its a perfect description of my dad, he even drives a Dodge Ram.  My girlfriend is an IPA lady and most of its true too, except for the winning at everything part, which SHE thinks is true, and doesn't like to admit to losing haha. As for me I guess my favorites are Ryes, Ambers, and really flavor-packed unique beers.  You could probably take a line out of each of the descriptions below and you'd have me pinned. 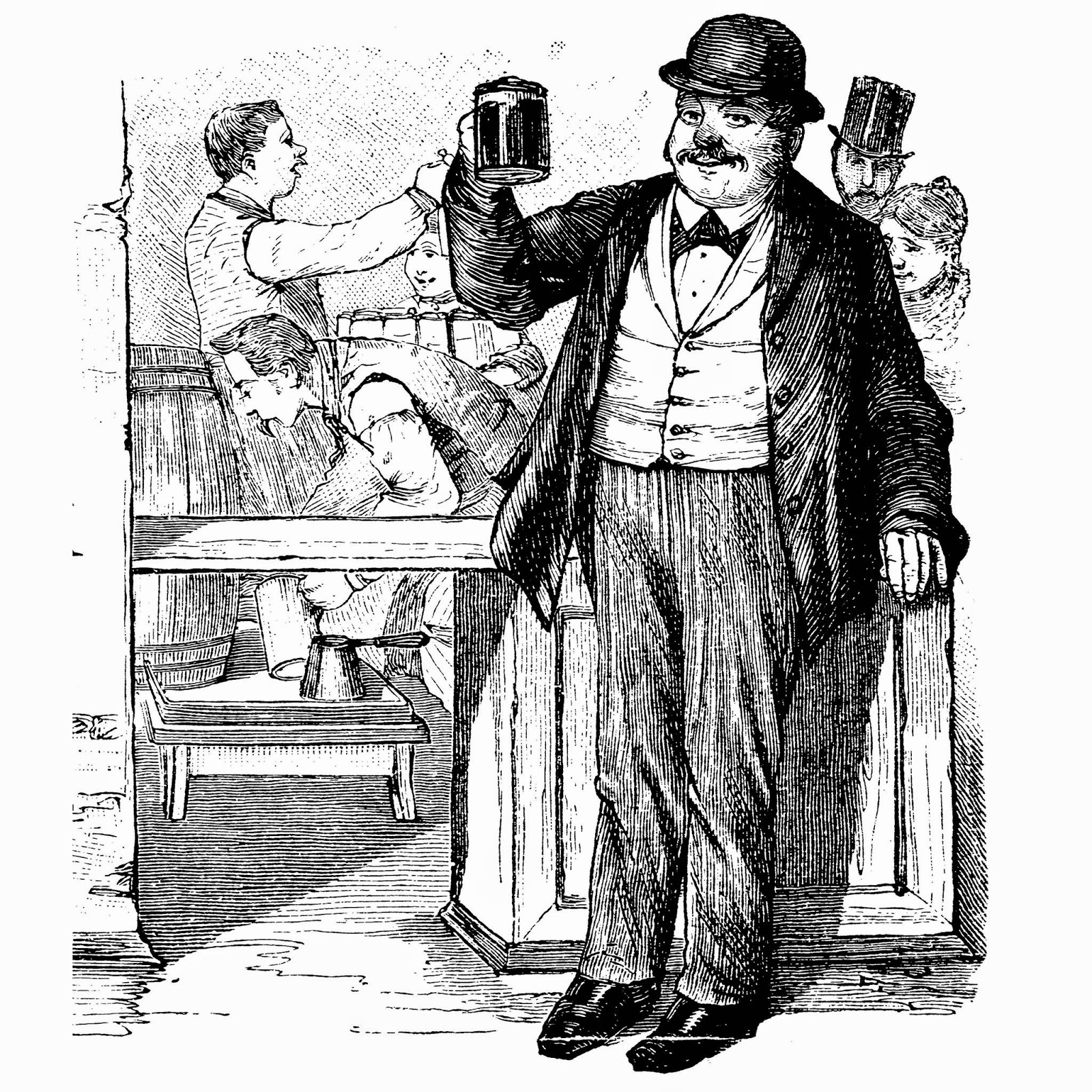 There’s a saying that anyone who claims not to like beer just hasn’t had the right beer. This year’s Great American Beer Festival showcased nearly 5,700 brews representing nearly 100 distinct styles. Even the pickiest drinker would have had a hard time not leaving happy. From crisp, refreshing pilsners to rich oatmeal stouts, every style of beer has its own unique character and story to tell. Here’s what your favorite kind of beer says about you.

Pale Ale: You are responsible but fun; mature but certainly not boring. You may have married your high school sweetheart and coach little league, but can still throw down a mean kegstand when college buddies are in town. You’re outgoing, charming, and non-threatening, making you the perfect wingman for your louder, attention-seeking mates.

Light Lager: You are a creature of habit, practical to a fault. You despise your yoga-loving neighbors, their J Crew-clad children, and their designer Labradoodle, Lucky. Your idea of farm-to-table involves Thursday Night Football, a TV tray, and a pot of chili made from an elk you shot and transported home in your Dodge Ram.

Stout: You are independent and reserved, eschewing the frivolities of pop culture in favor of a Hemingway read by candlelight in the basement of your wooded cottage. Every year, you look forward to participating in your town’s annual Civil War reenactment festival and frightening school children on class field trips. Nobody comes to your house to trick-or-treat on Halloween.

Saison: You are sophisticated and cultured. You are fluent in at least two Romance languages, and you roll your eyes when someone blows their nose in a cloth napkin. You love Victorian literature, Elizabethan theater, and Edwardian architecture. Your standard poodle won Best in Show at last year’s Westminster dog show.

Barleywine: You are mysterious and reclusive. You are a software developer for an online gaming company, but moonlight as the bassist in a death metal band called Fleshwound. You sport an unkempt ponytail and some sweet facial hair. You don’t have a Social Security Number.

IPA: You are extroverted and adventurous, always seeking excitement and novelty. You win at everything from chess to Settlers of Catan to debates about Tibetan sovereignty. You can be emotionally volatile, sweet and bright in one moment and abrasive and bitter the next. Pale Ale Guy is your wingman.

Sour Beer: You are thoughtful and sensitive, someone who still uses a typewriter and composes melancholy songs for the ukulele. Your best friend is your fifteen-year-old Cockatoo, Gretchen, who knows the lyrics to every song in Les Miserables. You are allergic to anything that has a shell.

Which beer are you?

http://www.foodandwine.com/fwx/drink/what-your-favorite-beer-style-says-about-you?xid=FWxNL110614WhatYourFavorite
Posted by Dylan J.K. at 9:53 AM 2 comments: 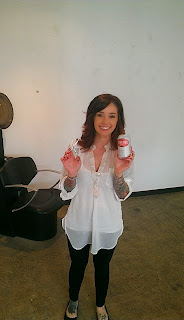 Somethings in life you just don't skimp on, a comfy mattress, dental care, and a quality haircut. If it's done by a hot girl that hands you a beer when you sit down, BONUS.

Shout out to Tina @ http://www.rebelsalondenver.com/ for hooking me up with a fresh ear lowering.
Posted by Dylan J.K. at 11:31 AM No comments: 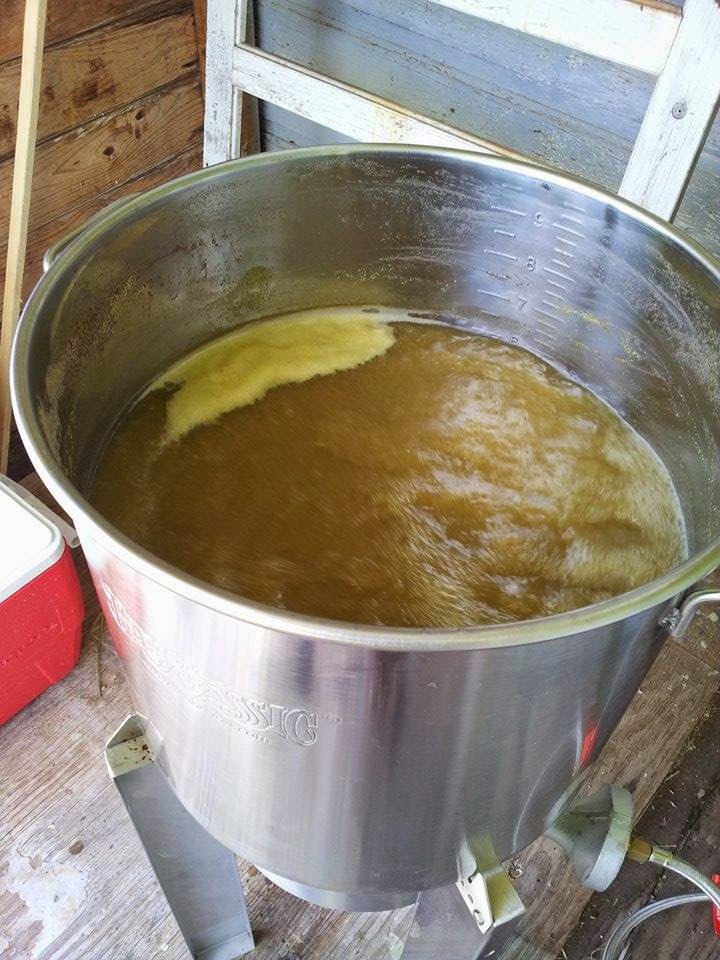 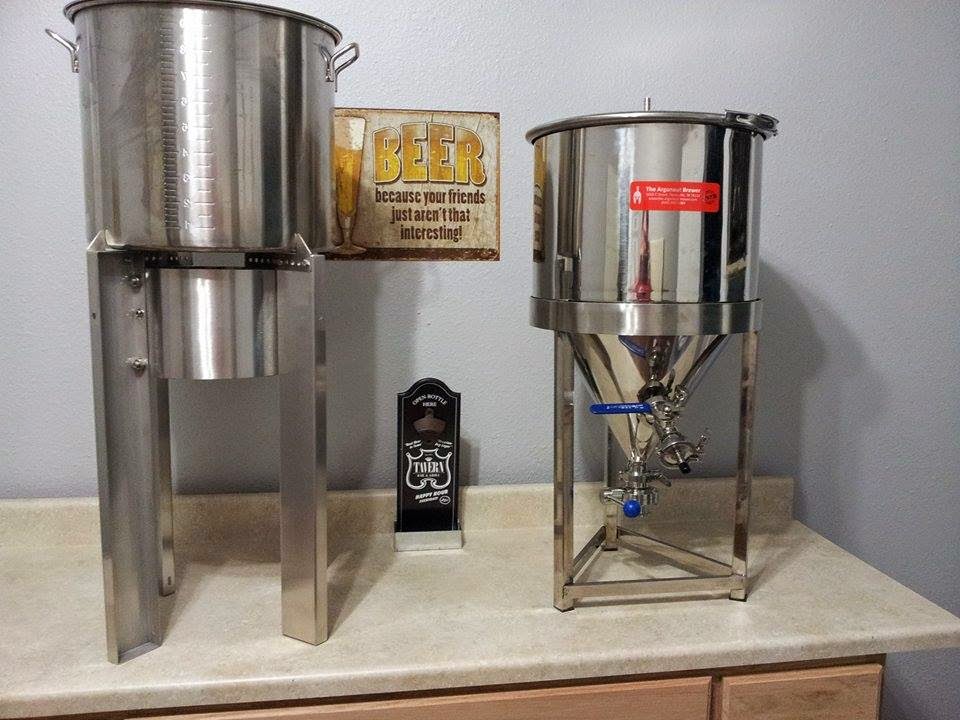 Professional equipment, they don't mess around in Texas. 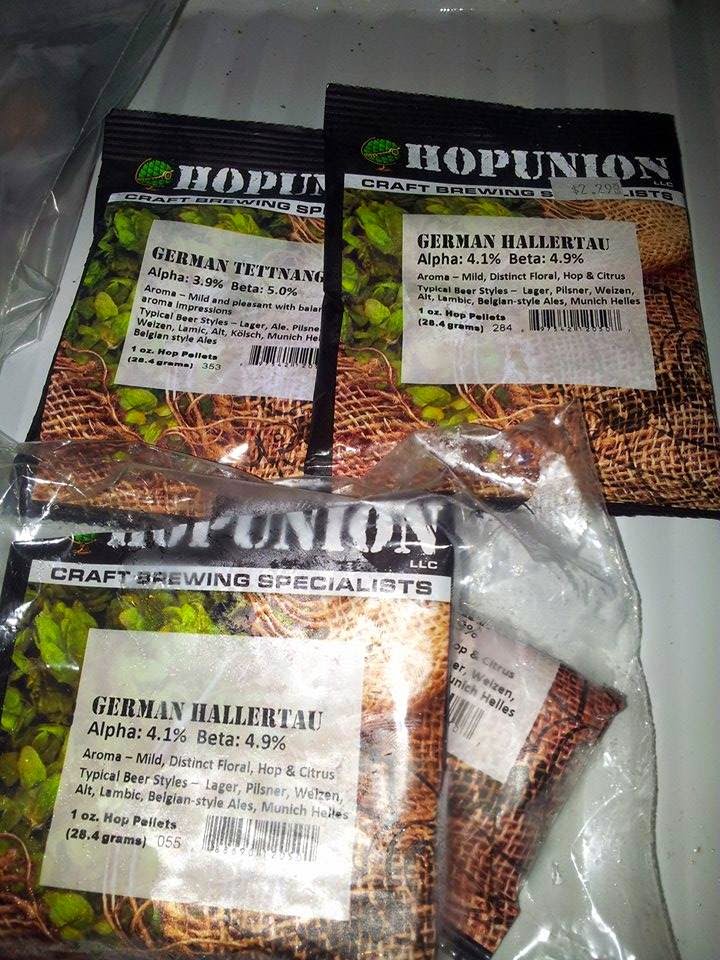 Hops that look like artillery, what is going on here? Oh its German. 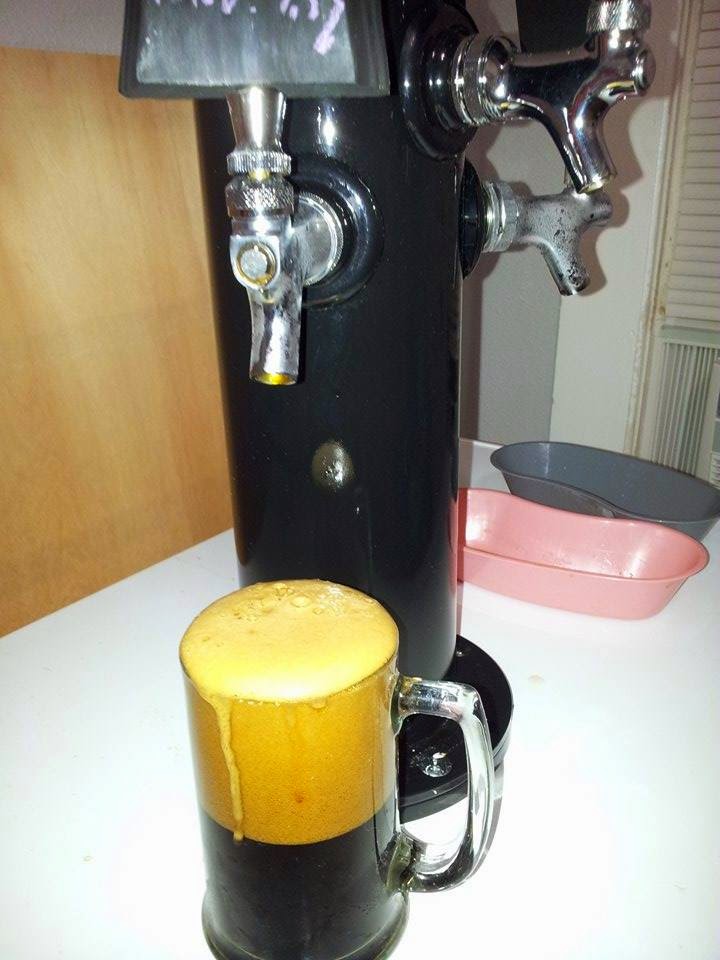 Sweet sweet nectar of the gods. 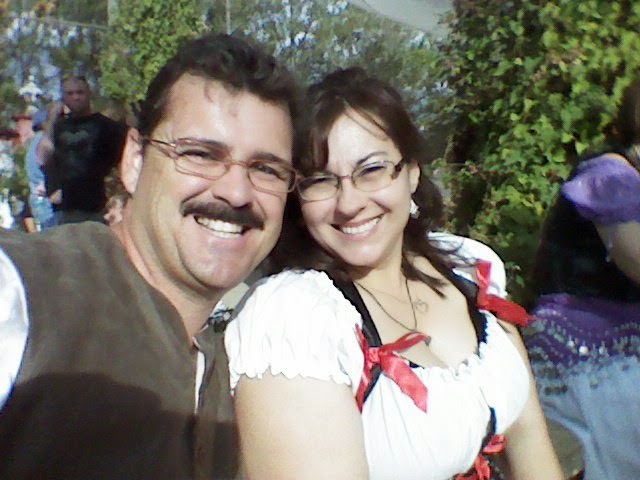 This push-broom on the left is Texas home brewer extraordinaire Mike Jordan and his lovely wife Lisa.

The interview with the beerpire

Mike: So how do you know Kat? (my daughter).

Me: (I thought I was asking the questions here... way to take charge of the interview Dylan)

Me again, or me actually talking outloud: I met Kat during Fun Fun Fun fest in Austin, we did a show together at the Velveeta room.

Mike: Ha, I think that might be her favorite place in the whole world.

Me: Its a nice club, and Kat is hilarious.

Me again: I was warned not to use the word Obama around you, is that for my own safety?

Mike: THAT SON OF A BITCH. Have you ever heard of blood eagle torture done by the vikings?

Mike: (Continues to tell me in graphic detail how the vikings used to torture people) PERSONALLY I THINK EVERYONE OF THOSE LIBERAL...

Me: (I'll spare you the expletives).

Me again: So Mike what level of home-brewing are we talking here?

Mike: Well I started with the kits, I have a technical mind, I'm big into guns and I load my own ammo. Its the same technical thinking process that goes into brewing.
We have a chest freezer called a Keezer and we keep three kegs tapped at a time.

Mike: There was a law passed in 1978, only good thing a democrat ever did that was worth a damn. It allows for a home brewer to make 100 gallons per year, 150 gallons if you're married. I don't know who checks on this sort of thing but we make a hell of a lot more than that I'll tell ya.

Me: So what have you concocted recently?

Mike: We made a pumpkin ale with 6 lbs of real pumpkin that we roasted in the oven ourselves. We also made a vanilla whiskey porter that included 8 oz of single malt whiskey from San Antonio. We make a lot of mead as well, and we don't mess around, we used 15 lbs of honey to make a 5 gallon batch.

Me: Have you seen the documentary The Vanishing Of The Bees? ( I didn't actually ask this, I was just thinking it in my brain).

Me again: In your opinion what are the best breweries in the Austin area?

Mike: Guadalupe Brewing (his white guy pronunciation of Guadalupe was hilarious) they make a Texas honey braggot, its a combination of beer and mead, its super thick and infused with a ton of honey.
Also Circle Brewing. They make a hef called Circle Blur, its one of the best beers around.

Me: I've always wondered this, maybe you know the answer. Which city originated the the slogan was it Keep Portland Weird or Keep Austin Weird?

Mike: I don't know but it fits, everyone in Austin IS freakin' weird.

Me: Do you like to experiment? What's the strangest beer concoction you've brewed yourself?

Mike: Last winter we made a black cherries & cinnamon smoked porter, it turned out very nice. We also made a sweet and spicy chocolate and ghost pepper that was sort of in between a stout and a porter.

Me: This next question comes from out of left field, where my mind is often located. Do you feel partially responsible for Kat's poor career choice to become a standup comedian?

Mike: Hahahaha, No not at all, we tried to guide her in the right direction but it just didn't work. She was 14 when I married her mom, and she's always been the type to just do whatever it is she sets her mind towards. The biggest perk is she gets us free tickets to big comedians and music concerts that come through town haha so I can't complain about her being a comedian too much.

Me: True. You're a lucky guy, Kat's pretty awesome.

Here's a video of comedian, and home brewer's daughter, Kat Ramzinski, oh its not just any video, it's a music video where she raps about Tecate!