Why? Served ice cold in a steaming hot shower, drinking this beer is like sitting in an outdoor hot tub while snow is lightly falling on your head, neck and shoulders. 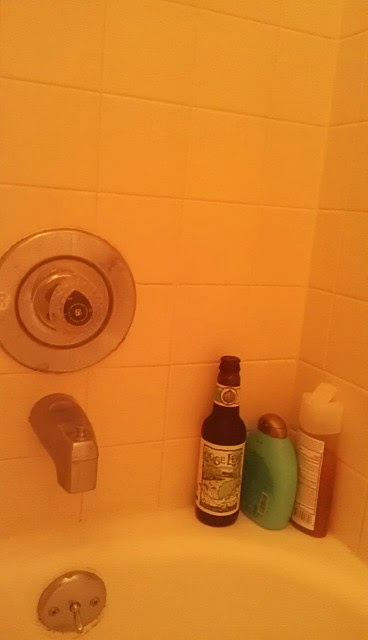 Why? Low carbonation means no loud Kssss when you open this guy. Comes in a large enough bottle to get a buzz off of, but not too large to hide in a small bag or large coat. Actually tastes like chocolate, verses most chocolate stouts that just taste like dark beer/coffee with chocolate aromas. Plus it doesn't smell bad to non-beer drinkers in the theater.
This is an important category...some movies require beer. 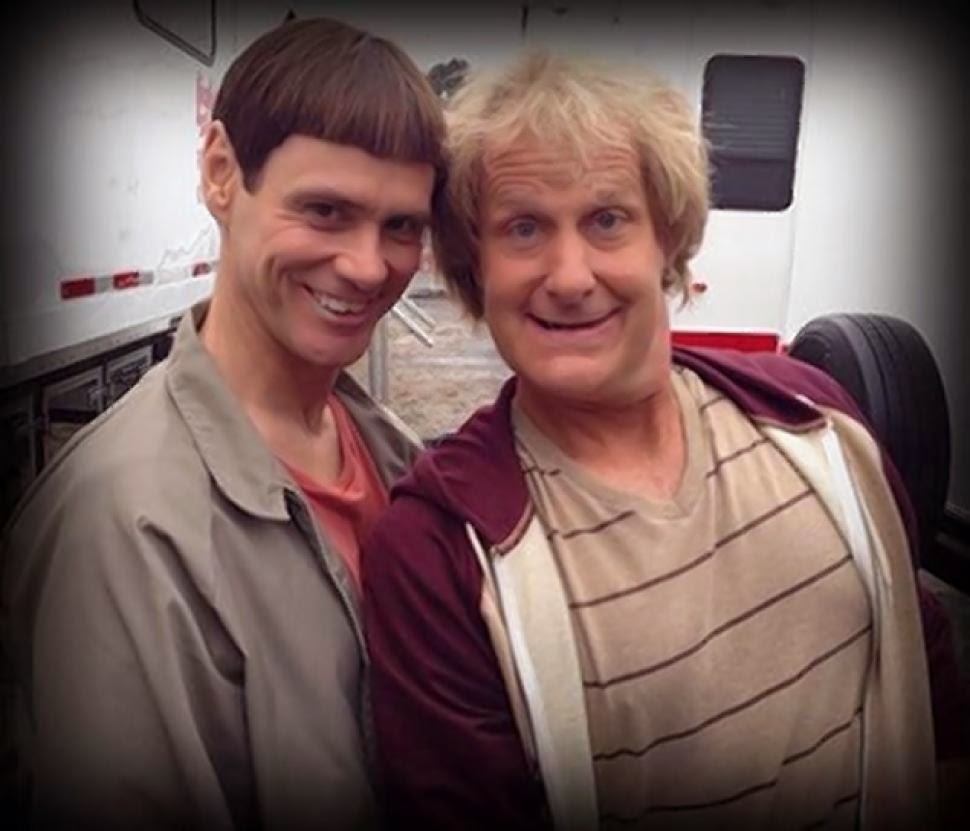 Why? It's an imperial stout brewed with coffee, cocoa nibs, and actual spaghetti.  Its delicious with or without dinner.  Think spaghetti noodle flavor, no marinara sauce included.

Why? Cinnamon, cocoa nibs, coffee, & coconut. This is the festive dessert god of beers. 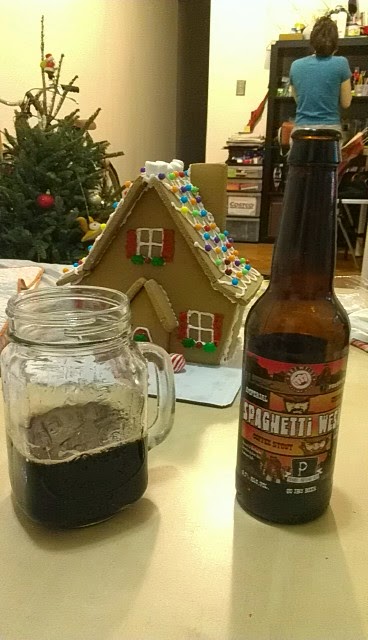 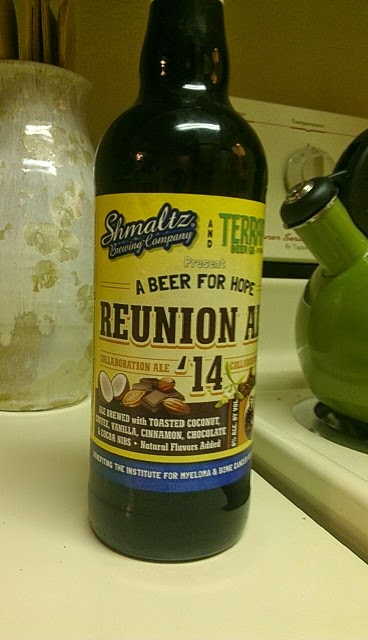 Why? They teamed up with the best ramen restaurant in New York City, Ippudo, to make a special brew specifically crafted to be paired with a bowl of ramen. 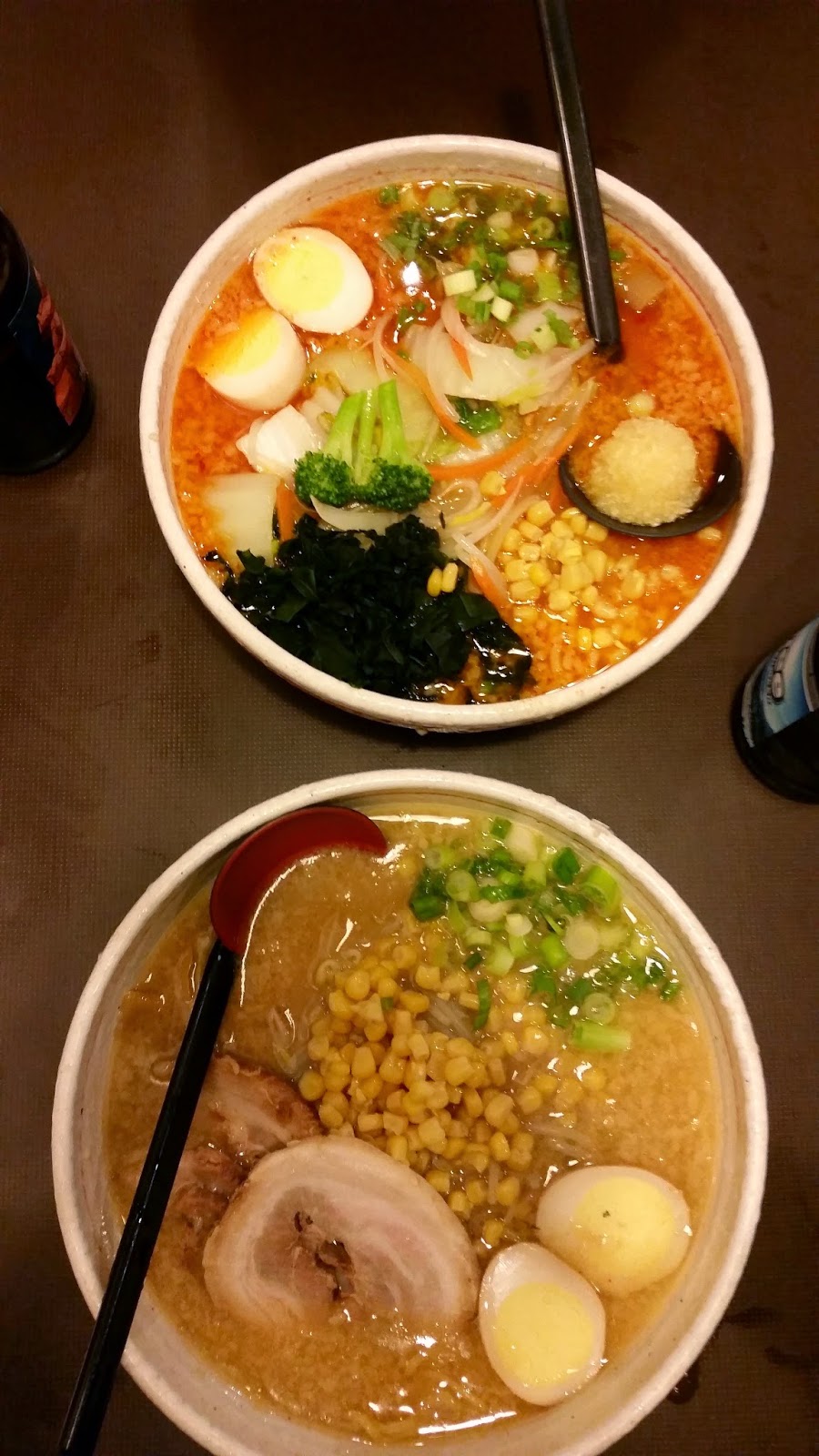 Why? Too many vanilla beers don't have much vanilla flavor, this one is perfectly balanced and the vanilla really pops. 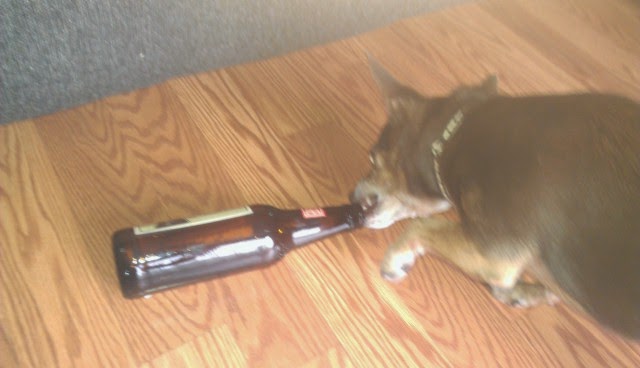 Best Brewery
Pimpin's Pick: New Belgium (Not our favorite beers, but they are incredibly eco-friendly, innovative, they have a solid collection of classics like Fat Tire & 1554 as well as very creative new additions like salted dark belgium chocolate & Coconut Curry, and they know how to have fun at their brewery with gigantic outdoor slalom style shuffle board and free funky post cards they ship for free.
Readers Poll: Elysian - Seattle, Washington

Everything is subjective, we'd love to hear about your favorites of the year as well, so please post them here in the comments below. 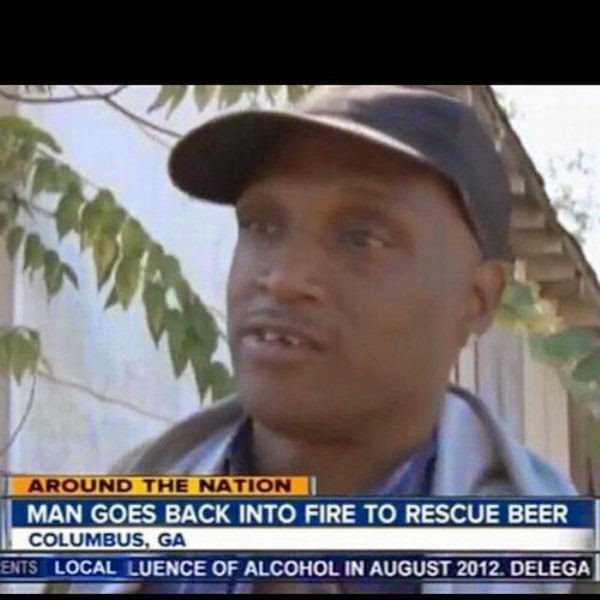 What kind of beer do you think he saved? 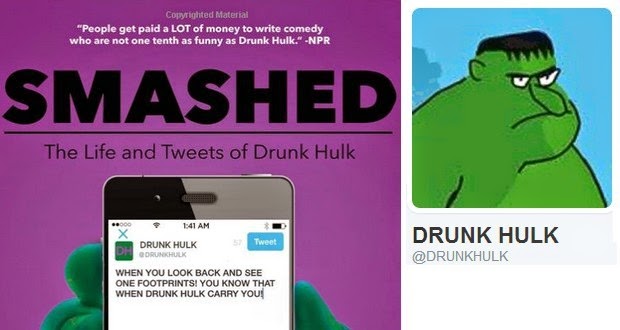 BOOK REVIEW: SMASHED: The Life and Tweets of Drunk Hulk by Christian A. Dumais

How famous do you need to get in order to have your profile pic be an animated GIF? I'm not sure but DRUNK HULK is the only one I've ever seen, and he weighs-in pretty hefty with over 189,000 Twitter followers. I'm one of those 189k, and have been a big fan of DRUNK HULK for several years now.  What? You thought this review would be unbiased? Pimpin' 101 baby, I just don't give a F@#K. So when I was sent a copy of his new book SMASHED to review, I may have crushed a beer can on my forehead in excitement.

This book is formatted in unique and creative ways from the table of contents written as a bar tab receipt, to the chapter titles being actual quotes from his Twitter feed. I can lie, I’m a sucker for comic book character satire. At one point I used to do a gay batman in my stand-up act. This guy has jokes, simple yes, corny maybe, but funny, definitely when you read it in your head in a drunk hulk voice. Here are some of my favorites:

"DRUNK HULK WANT TO STUDY A BROAD IN COLLEGE BUT SHE SAY NO!"

"DRUNK HULK ALLOW ONLY 1 CARRY ON FOR FIRST DATE, LEAVE YOU BAGGAGE AT HOME!"

"DRUNK HULK STEP ON DOVE BY ACCIDENT! PRINCE FULL OF CRAP! THAT NO HOW IT SOUND LIKE WHEN THEY CRY AT ALL!"

Dumais is just such a big relatable oaf, he's the Louis C.K. of drunken comic book characters. Take how he paints the picture of social differences between Polish and American culture via the way we greet each other and respond to How are you doing? for example.

SMASHED: The Life and Tweets of DRUNK HULK eloquently (for a hulk) breaks down the meaning of life, or more fittingly the meaning of life on Twitter, what works for people, what doesn't, and why. Like most of us who have tried to become famous online know, look at me! look at me! doesn't work, humor is a much better way of earning affection and grabbing attention; DRUNK HULK has mastered this technique.

Buy this book. Place it on your coffee table.  Your friends who fumble through it while waiting on you to take a dump will appreciate it. 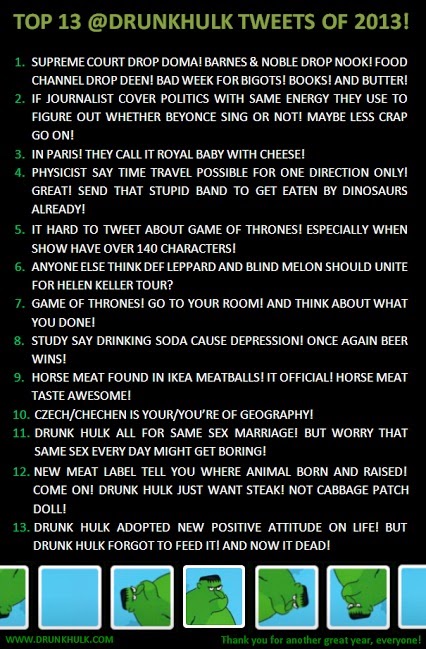