How to Snag a Craft Beer Babe 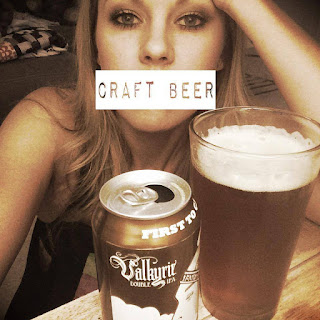 That actual beer went into that actually belly. This is not an ad, and that is not a model.  That is craft beer enthusiast, beer blogger, and artist, Amanda Miller. Pimpin' knows how difficult it can be to meet a good woman in this day and age. Skew that down to beautiful women with a palate for craft beer, and your odds just got dissected into fractions. So Pimpin' is going to help a brother out.  I interviewed Amanda, and tried to get the inside scoop on just how best to go about trying to meet a hop-forward heroine. 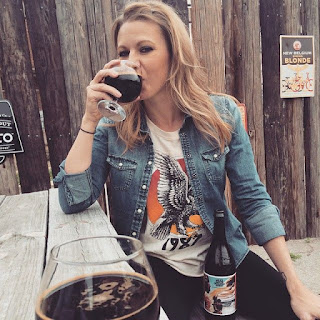 Pimpin': What are the best places for guys to approach you?  Beer bar? Park? Event? Etc?

Amanda: Honestly all of the above.  You could even throw in the grocery store.  Love me a man that cooks!  Key is confidence, don’t be scared but don’t be a douche bag either.  No cheesy lines, hello works just fine.  If you have Facebook or Instagram and you have shirtless selfies in the bathroom, just walk away.  Nope.  Bye Felicia!  If we are in a beer bar just ask me what I’m drinking, simple conversation starter because I enjoy talking about different brews.  Let’s play Jenga or a game of pool, I’ll most likely win.

Pimpin':  Are there any stereotypes, general differences in personalities between women that drink craft beer and those that hate beer?  How about those that drink macro PBR/Bud Light?

Amanda: For those women that hate beer…HIGH MAINTENANCE BITCHES!  Just kidding, sort of.  Not all of them are.  I have a very good friend that is cool as shit, loves sports and outdoors, and can hang with the guys much like myself, but she prefers tequila or vodka.  She just doesn’t have the taste for it and that's fine.  I have turned my macro beer drinking girlfriends into craft beer drinking friends.  That or I just surround myself with the craft girls now.  They seem to have a laid back personality like I do, mixed with a bit of adventure and wit!  Almost all the girls I hang with, and there are only a select few, drink craft beer, so that is pretty rad.  I love sharing my beers with others and letting them taste something with actual flavor.  But to each their own. 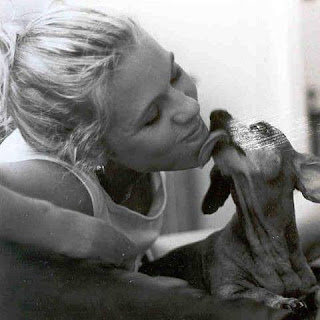 Pimpin': High maintenance bitches is kind of a harsh label, how about we just refer to them as basic bitches?

Pimpin': What is the best pick up line you've ever heard? Worst?  Do you generally find them amusing or annoying?

Pimpin': How about "what's your boyfriends name? You don't have one? How about (insert name) does that sound like a good name for a boyfriend?"  That's the only line I've ever used. Tried it twice when I was in college. Worked both times haha. No, no lines...they're all super cheesy, okay, got it.

Pimpin': Is there anything that makes a craft beer drinking guy more attractive beyond just what beer he's holding?

Amanda: They seem to come with a touch more intelligence lol, sometimes a beard too and that is great!  They have a little more adventure to them because once you love the taste of the craft you seek them out.  They aren't afraid to explore and try new things, and that’s a nice trait aside from just the beer.  They are also not normally the “frat” type that are trying to pound down shitty beer to get buzzed.  They look for new places that have different varieties, you don’t just stick to the same old sports bar that has nothing craft on tap.  They want to visit breweries or craft beer bars in different places.

Pimpin': The popularity of the beard is really helping us beer-geeks out, that's for damn sure. We still have to keep in mind we're always going to get sloppy seconds after these guys (below), they rule the bed. Its a wonderful thing how often beer people tend to be dog people as well. Your dogs are adorable Amanda. 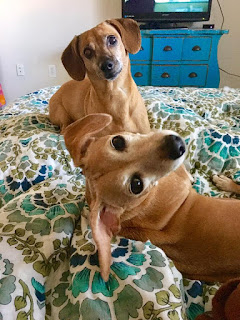 Pimpin': Have you ever turned down a guy that tried to meet you at a bar based on the beer he was drinking?

Amanda: Hmm, I can’t say that I have turned one down yet, since I frequent craft beer bars mostly. But if one was drinking a shit macro beer elsewhere, then I at least talked shit to him and tried to explain the importance of quality brews.  Some of them don’t care, and some I have gotten to try craft brews and they enjoyed them.  I try not to judge, but I will try to persuade you into something better.

Pimpin': I guess the moral of the story is: drink shit beer, expect to hear some shit-talk.

Pimpin': There is a popular new trend that many women say they prefer a guy to buy them a book when they are at a book store instead of a drink at the bar. What are your thoughts on this?

Amanda: Well I did not know this was a trend.  So if I was at a dog park, is the new trend there for the guy to pick up my dog’s shit? I can get down with that!  I enjoy a good read, but actually download my books, even though a bookstore is actually nice to be in.  I find a bookstore a more personal setting.  What if I was buying a self-help or The Guide to Getting it on (which I do own for conversation/humor purposes)? Not sure we want to dive in head first on the initial meet and greet.  Never met a guy in a bookstore before.  I’m happy to talk beer and have him buy me a delicious treat at the bar though.

Pimpin': I'll go ahead and humor Amanda that I believe she bought The Guide to Getting It On for conversational purposes. After all, in the words of the great Young M.C. "tell a funny joke just to get some play, then you try to make a move and she says no way." I'm imagining a world where craft beer is served on tap at the bookstore, its a glorious world. 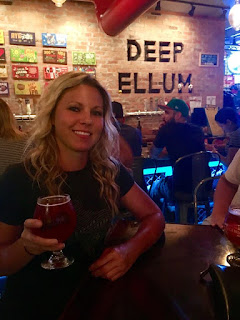 Amanda: Knowledgeable but not over the top like a know-it-all.  Don’t try to explain to me why Coors or Bud Light is awesome.  I ain’t havin' it.  I like recommendations on things that I haven't tried.  I like to learn and share new things I've learned to those that are new to the craft.  We always have room to learn.

Pimpin': Except about macros, there is no room for learning about how Budweiser is awesome, I think we can all agree with you there...except my dad, I love him but he'd go to bat for Bud in any and all occasions. I guess I should just be thankful he didn't name me Bud...

Pimpin':  Many women don’t drink beer because of calories. Do you eat certain things to leave room for more beer? Workout? Or just don't give a damn?

Amanda: I have never really been a calorie counter.  I thank my parents and my eating habits for my small frame.  I have always been a pretty healthy eater, and never really eat very big portions.  I used to workout more than I do now, but I have maintained my weight and clothing size all my life.  So I guess I don’t really give a damn, I like beer, so I drink beer.  I think it keeps me youthful.

Pimpin': Many women are hating you right now Amanda. I applaud your healthy eating habits, and to your efforts of not conforming to societies bullshit ideals that women shouldn't drink beer because it will make them fat. 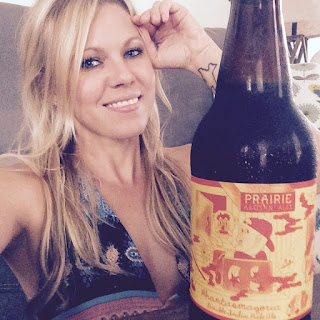 Pimpin': Have you noticed that guys treat you differently because you are a craft beer drinker and enthusiast? In what ways?

Amanda: Uh, a beer drinking babe.  Pretty much enough said right there.  The fact that it’s craft over macro really hits a home run!  I am laid back and easy to get along with, good at kickin’ it with the guys and the fact that I like quality brews is a plus.  I mean what guy doesn’t like a beer drinking chick?  I tell them that I have a craft beer blog and that typically sparks an interest.  Right now my Instagram is my “blog” because it is quick and easy.  People like visuals and it’s easy to follow and like.

Pimpin': "Uh, a beer drinking babe." Definitely my favorite of your answers today and you've had some good ones. Guys, and gals out there in reader land, definitely check out her work: www.theartofbeers.com  Instagram: @theartofbeers)

Pimpin': What is one piece of advice you'd give to beer geek guys trying to snag a beer geek babe?

Amanda: Be yourself, drink good beer together, and have fun!

Pimpin': It's that, being ourselves bit, that so many of us struggle with...

Pimpin': Lastly do you have any funny or interesting or horrible stories involving meeting guys and beer or dating and beer?

Amanda: Nothing too wild.  What’s cool is the whole craft beer community I've been exposed to now.  I did my first beer trade with a guy that works for one of the best breweries, Ballast Point Brewing.  He even helped brew one of the beers he sent.  It’s nice to be part of something no matter what it is.  More and more people share things with me now as far as new beers, or beer events, because they know it is something I am passionate about.  You know, it’s a hobby and it’s fun!  Drink good beer my friends.  Cheers!

Pimpin': Well, thank you very much for taking the time to shed some wisdom on our Pimpin' readers. We definitely enjoyed your insights, and look forward to continuing to follow you through your website and social media.

Pimpin': Guys, let's have some fun, and leave a comment below for Amanda, with your favorite, funniest, or cheesiest pick up lines!