Your Turkey Day Pick 6: Beers to Drink With Your Leftovers

Everyone and their Dogfish came out with a list of beers to drink with your Thanksgiving meal this year. So I've decided to switch it up  a bit and create a 6-pack mixer that best pairs with your weekend following turkey day, and those mass leftovers.

1. Day old bean casserole, likely microwaved, let's be honest, and could definitely use a pick me up. Casseroles and November evenings both pair perfectly with porters. An exceptional one, that has, as of earlier this year, spread to a lot more markets around the country, is Breckenridge's Vanilla Porter. I'll take this bottle over any porter you can find in a grocery store sans maybe those lucky North-Westerners that have Deschutes Blackbutte Porter in their isles. 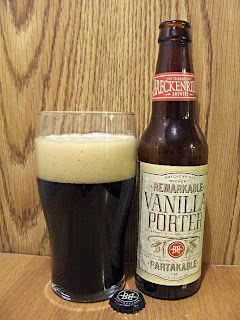 2. Leftover biscuits turned into a breakfast sandwich is a win we often forget most other times of the year. What's better with breakfast than coffee? Obliviously a coffee stout. Ale Smith's Speedway Stout is an American Imperial in a league of its own. If you have a sweet-tooth like me, its a little harder to find, but the Vietnamese coffee version of Speedway Stout is killer as well.

3. You've ran out of cranberry sauce and your turkey sammy is dry. No fear Ommegang Rosetta is here. Its very cherry, but it isn't strawberry-rita or anything like that sugary crap marketed towards sororities. *Disclaimer if there are any sororities out there that value craft beer I sincerely apologize. Unless you are on-board with mocking all of your rivals with me, then lets do this!

4. Pie? There's always room for pie.  On turkey day my favorite has always been pecan. When pairing with sweet nuts, yeah I'm talking to you sweet nuts, I like to go boozy. Weyerbacher's 11% abv English barley wine Blithering Idiot cuts pecan pie as well as that metal triangle thingy you use to dish yourself out a slice.

5. Stuffed on stuffing? You'll need something light and refreshing to wash down all that bread. Jazz it up with an unique flavored gose. Breweries at Two Roads and Evil Twin teamed up to make an excellent brew called Geyser Gose. It uses adventurous ingredients like Icelandic moss that really pop.

6. Sunday sporty Sunday. By the Sunday after Thanksgiving arrives you've likely already had a long stretch of binging and drinking. And you should probably stop, but there's a game on, actually there is a whole day of games on. At this point I'm thinking light on the snacks, maybe even some carrot sticks. For something to session that actually packs flavor, put Firestore Walker's Easy Jack in this weekends lineup.

On a closing note, I chose all of the above beers because they were easily accessible to me, in multiple grocery stores. Obviously it depends on what region you live in. But I'll take a guess that I'm not the only one slightly annoyed by beer pairing lists that recommend rare or hard to find brews. You know what else goes well with Pliny The Younger? A flight to California and a ride on an actual whale! Happy Thanksgiving everyone!